The 13th at First Manassas 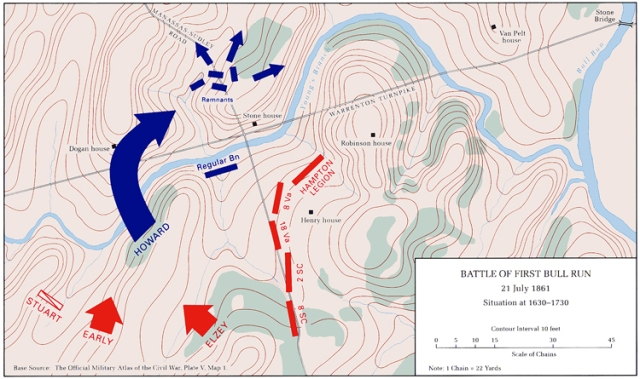 Arriving on the Confederate left, after 3 p.m. Gen. Early directed his brigade into line: the 7th Virginia on the right, the 13th Mississippi in the middle, and the 7th Louisiana on the left. To their left was Col. J.E.B. Stuart’s cavalry and a battery of artillery under a Lieutenant Beckman.

Early: “…a body of the enemy approached on the crest of the ridge immediately in my front, preceded by a line of skirmishers. This ridge was the one on which is situated Chinn’s house…The formation of my troops was in full view of the enemy, and his skirmishers, which were about four hundred yards in front of us, opened on my men, while forming, with long range rifles or minie muskets.”

After some initial confusion, in which an officer of an adjacent Rebel regiment on the right tried to stop them from advancing, and Early himself confused the Union flag with the new Confederate First National one, the three regiments charged up and over the ridge. They were lucky. The hardest fighting, earlier in the day, was over…

Henley of The Pettus Guards: “We soon reached the summit of a hill from which the scattered enemy could be plainly seen hurrying off as fast as their feet could carry them…the enemy’s dead lay scattered in heaps…Guns, swords, knapsacks, blankets…covered the ground for miles…”

Wallace of The Winston Guards: “They ran like turkeys…Our artillery still firing on them as they ran…We followed them about three miles and we had to stop for we were tired down. We stacked our guns and lay down without anything to eat or any blankets…”

“Compared to later battles, casualties at First Bull Run had not been especially heavy. Both Union and Confederate killed, wounded, and missing were a little over one thousand seven hundred each.”—U.S. Army Center for Military History (also the source of the map).

4 Responses to The 13th at First Manassas