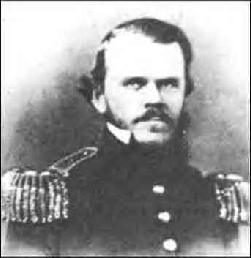 He was a West Pointer and an Indian fighter who was a good friend of Gen. Robert E. Lee, their having served together in the elite 2nd U.S. Cavalry.

Evans was the fightingest brigade commander the 13th would have until their own Colonel William Barksdale was elevated to brigade command in the summer of 1862.

Evans comes off much better in Silverman than he does, say, by the U.S. Army History Center which has this to say:

“His passion for alcoholic beverages led to constant difficulties with his superiors, and he was subsequently tried for drunkenness and acquitted and later for disobedience of orders and also acquitted.”

Silverman shows that Evans did have a penchant for modifying orders when he saw the need, but that his trial for alleged drunkenness was more about the backstabbing of a rival. Evans was more warrior than drunkard and he showed it early in fighting Comanches, for which the South Carolina legislature awarded him a commemorative sword and an adoring proclamation.

Lee’s letters to Evans (in Silverman’s book) when they were in the 2nd Cav and later during the war, read not as a commander to a subordinate but almost as a father to a favored son. Once, on the Plains, Lee even sent Evans a small keg of whiskey, asking only for the return of the keg. Whiskey was for drinking, sure, but in those days of few reliable medical remedies it also had medicinal uses, chiefly to relax a patient under the stress of illness or wounds.

Evans wasn’t very prescient, however. He often prophesied to his wife that the South would soon win the war. He even urged her to buy more slaves, guaranteeing their postwar poverty.

He won early fame at First Manassas, as a newly-promoted colonel, when he disobeyed Gen. Beauregard’s orders to fall back against a superior Union force and, instead, attacked. Concludes the Army history center:

“…his command went far toward saving the day for the South. During the thick of the fight, he was everywhere, closely followed by an aide carrying a jug of Evans’ favorite whiskey.”

You see the theme of modern history on Evans. Silverman quotes a colleague of Evans who says he used the Manassas jug chiefly for his wounded, as he had so many in his already-thin brigade.

“Three times at the battle of Manassas, and several times at Sharpsburg, was it emptied and refilled, and then emptied again among the feeble ones who lay bleeding on the ground, the General himself dismounting, and on bending knee applying gratefully relief to the parched lips.”

We now know that alcohol robs the body of water, so the parched lips would have stayed parched. After First Manassas  Beauregard moved Evans to a new brigade—composed of the 13th, 17th, and 18th Mississippi regiments and the 8th Virginia, a few cavalry units and a battery of the Richmond Howitzers—and posted it at Leesburg to block any new Union crossing of the Potomac.

Despite the continued, sometimes fatal, illnesses among the Mississippians, Evans drilled the brigade continuously and had them build an earthen fort whose remnants still exist. He sent out scouting parties to discover the plans of the federals who were fortifying the Maryland side of the river, and had his artillery exchanging fire with the federal batteries.

Evans eventually used parts of his brigade to drive several Union regiments, which had crossed the river at Ball’s Bluff, back into the Potomac. That won him his brigadier general’s star and a transfer home to defend South Carolina from invasion. He would come back to Virginia for Sharpsburg and then go on to Vicksburg for a warrior’s frustrating service under the ever-retreating Gen. Joe Johnston.

In the last year of the war, Evans languished in Charleston, SC, under house arrest for alleged disobedience by Beauregard (who apparently hadn’t forgiven the disobedience of ’61), but Evans was in North Carolina for Johnston’s surrender to Sherman.

A probable head injury in downtown Charleston, when a runaway horse flung Evans from a carriage face-down onto the cobblestones, may have contributed to his early death soon after the war.