The 13th at Ball’s Bluff and Edwards Ferry 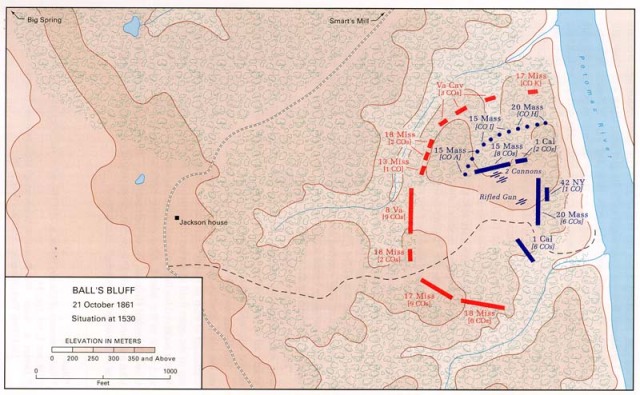 The 13th regiment spent an uncomfortable Sunday, Oct. 20, entrenched at Goose Creek on the Leesburg turnpike near Edwards Ferry. They were wet from drizzling rain, cold without the blankets they had left with their baggage at Fort Evans and there was nothing to eat. All they had was the anticipation of what everyone in the Seventh Brigade thought sure was to be a fight.

Pvt. Henley, the Spartan Band summed it up:

“The marching and countermarching for the last four or five days, the privations and hardships incident thereto, and the feigning and complaining of sickness had considerably reduced our numbers. But nevertheless the few remained brave and undaunted as ever…The roads were in wretched condition, slick and muddy….A drizzling and wetting rain still falling….”

Most of the rest of the brigade, also in rifle pits nearby, were in the same fix. Except for the artillery and most of the cavalry, which were in and around Fort Evans a few miles to the northwest. A company of the 17th Mississippi regiment also was on picket duty near Ball’s Bluff as it had been since late August.

The brigade was waiting at Goose Creek for what Col. Evans expected to be Union Gen. McCall’s division’s advance up the turnpike from Dranesville, about 14 miles southeast of Leesburg. Evans was unaware that McCall had been ordered to stop at Dranesville, and had only sent out skirmishers beyond that point.

Near sunset that Sunday, Evans learned that his cavalry picket near Edwards Ferry had been driven in by Union skirmishers who had crossed the Potomac River from Maryland. He had the Richmond Howitzers send two guns from the fort. A howitzer and a rifle-gun were brought up  near the 18th Mississippi’s camp a few miles from the ferry, and the night settled quietly for all.

Overnight, however, pickets of the 17th’s Magnolia Guards at Ball’s Bluff detected Union units crossing the Potomac there and took what turned out to be five companies of the 15th Massachusetts Regiment under fire. By dawn, Evans had sent some cavalry from the fort to assist the about 40 Magnolia Guards with the crossing of more of Union Gen. Stone’s division, including two companies of the 20th Massachusetts.

Soon after first light on Monday, Oct. 21, the 13th regiment got into a brief skirmish with some 3rd New York cavalry troopers who also had crossed the river near Edwards Ferry and were reconnoitering the turnpike. They’d come across the river with two companies from the 1st Minnesota Regiment.

Morgan in A Little Short of Boats said the 13th and the New Yorkers banged away at each other at a range of 30 to 35 yards. The cavalrymen lost a horse in the exchange. The Minnesota troops, meanwhile, stayed down on the river bank.

Evans later reported that by 10 a.m. he’d decided that the Bluff engagement was “the main point of attack” and the Edwards Ferry crossing was only a feint. Indeed, by 11 a.m. the remaining five companies of the 15th Massachusetts had crossed the river to the bluff and Evans’s cavalry was calling for reinforcements.

About noon, Evans ordered the 8th Virginia to the bluff. As that fight developed, he sent another company of the 17th and two from the 18th Mississippi along the creek to assist the Virginians. Eventually, as the Union force on Ball’s Bluff grew with additional companies from the 42nd New York and the 1st California, Evans called for the rest of the 17th and the 18th to march to the sound of the guns.

Col. Barksdale also had been ordered to send a company of the 13th to the bluff. He chose the Minutemen of Attala, under Captain Lorenzo Fletcher who marched its 90 men to Fort Evans.

Minuteman Pvt. Mike Hubbert wrote in his diary that they double-quicked the two miles to the fort “and took our position in a cluster of woods where we lay for some time” awaiting Evans’s orders.

As the afternoon wore on, Gen. Stone sent more troops across the Potomac to the Virginia shore at Edwards Ferry: three New York regiments, one from Michigan and two 12-pound howitzers from the 1st U.S. Artillery.

The 13th, ordered as Henley of the Spartan Band put it “not to engage but simply to hold them in check should they attempt to advance,” watched as the number of Union troops grew.

About mid-afternoon, Barksdale sent out two companies, the Wayne Rifles and the Spartan Band, to reconnoiter nearer the ferry landing. They got into a brief fight with some Union pickets, and one of the Wayne Rifles, William Davis, apparently was captured.

Davis may have surrendered. McLean says Davis’s muster roll shows he “‘Took the oath of allegiance not to bear arms.’ [Appears to have deserted.]”

Meanwhile, back at Fort Evans, Captain Fletcher’s Minutemen of Attala finally were ordered to march to the bluff. Morgan, whose history is an attempt to create a timeline for the battle from the sometimes sketchy evidence available, decided that Fletcher’s inability to find the 8th Virginia until, as he reported later, he “procure[d] a reliable guide who knew the positions occupied by the contending parties,” meant the Minutemen had gotten lost in the woods.

“Reading between the lines of his report,” Morgan writes, “it appears that Fletcher got lost among the deep, twisting, thickly wooded ravines on the northern portion of the battlefield behind the Jackson house. Anyone who has walked that area will appreciate the ease with which that could have happened.”

Minutemen diarist Mike Hubbert, however, seems to dispute that. His entry of Oct. 21 does not mention the company getting lost, but says only that “we had not gone far into the woods before we met with about a half a regiment of Yankees who we immediately engaged and drove back.”

The Minutemen eventually got positioned alongside the 8th Virginia and the other Mississippi companies and helped them capture the Union artillery pieces, drive the Union troops over the Bluff, and shoot down at them from above as they struggled to swim back across the Potomac. The defeat cost Stone’s division about 900 casualties vs about 150 for Evans’s Seventh Brigade, most of them from the 18th Mississippi.

Late that Monday, Gen. Stone, whose headquarters was at Edwards Ferry on the Maryland shore, several miles from Ball’s Bluff, was beginning to realize that he had a disaster on his hands.

He decided to withdraw the 2,500 troops he had put ashore in Virginia at Edwards Ferry lest they be similarly driven into the river by the Confederates. But Stone was overruled by his superior, Gen. McClellan, who ordered him to hold the Virginia riverbank “at all hazards.”

The 13th, meanwhile, had withdrawn to nearby Fort Evans where they spent Monday night. Col. Barksdale sent two companies, the Secessionists and the Spartan Band, back to the vicinity of Edwards Ferry as overnight pickets to warn of any advance of the enemy.

“Cold, weary and as unwilling as we were, we had no choice but to obey. [A] discharge of musketry was kept up during the entire night. Sometimes at long intervals and others in rapid succession, though by whom and for what[?] They nevertheless kept us up and down all night.”

Overnight, Gen. Stone, who was apparently ignorant of Evans’s inferior strength, pushed the 16th Indiana and 30th Pennsylvania across the river, eventually bringing his total force there to more than 4,000 troops, according to Morgan.

“The Union soldiers did little but stand in the rain trying to stay dry and warm. Col. Barksdale’s 13th Mississippi, however, began maneuvering about 11:00 a.m. to find a good place from which to launch an attack. It took several hours before they were ready.”

On the march back to the ferry, the 13th met a slave whom Col. Barksdale “compelled…to guide us to the least conspicuous road” to the Union position, Henley recorded. “We marched on, concealed entirely from observation till we reached within three hundred yards of an old field, where we halted…”

Col. Barksdale sent Captain William J. Eckford of the Wayne Rifles with the Rifles and the Lauderdale Zouaves ahead on skirmish. About 4 p.m., along Goose Creek, they surprised the pickets of the 1st Minnesota “posted in squads,” as Henley recorded, “along the fence playing ‘poker’ or some other game” and charged and drove them back to their own lines.

Col Barksdale brought up the rest of the 13th and they joined in the charge, across almost 400 yards of open field “yelling like Demons, and driving our pickets ahead of them in double-quick time,” Morgan said Sgt. Henry Lyon of the 34th New York remembered.

Two quick rounds from the 12-pounders the Yanks had near the ferry, however, halted the charge and quickly dispersed the 13th. They left behind a drum which was claimed by the 7th Michigan as a souvenir.

The 13th lost two men killed, Lt. Hardy Craggle Fluker and Pvt. Asa Simmons, both of the Lauderdale Zouaves. Henley later described the attack as “a fruitless charge,” because there was no more action that day. The next day, Wednesday, Oct. 23, Gen. Stone’s troops withdrew back to the Maryland shore.

But the charge may not have been so fruitless. It seems incredible that the Union forces did not push on to Leesburg after so little opposition. But they already had taken a beating at Ball’s Bluff and they weren’t sure what they faced beyond Edwards Ferry.

Indeed, one of Gen. Stones’s brigade commanders who witnessed the 13th’s charge and retreat reported that “They numbered over 3,000 infantry, with some cavalry in reserve.”

Given their sickness of recent months and the straggling from all the marching and the countermarching since Oct. 16, the 13th certainly took no more than about 600 men into the fight.