The Journey: the retreat continues 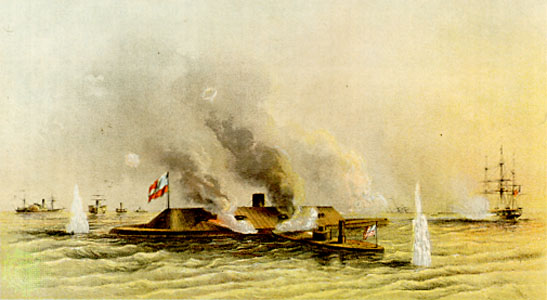 The 13th marched on through Middleburg to pick up its tents and baggage and, after an additional 16 miles, camped Saturday night at White Plains on the Manassas Gap Railroad.

They resumed marching south the next morning, March 9th, this time for Warrenton in Fauquier County—about the same time that the Union Monitor was famously fighting the Rebel Virginia in Hampton Roads—and after 12 more miles of rough, stony turnpike and scaling fences, exhaustion and straggling became a problem.

Hill recorded the troops were: “very much fatigued and several have broken down and stopped” before they finally camped three miles from Warrenton on Sunday evening.

“Their cavalry, annoying our rear, have done us but little damage. General Hill arrested [Quartermaster] Captain Turner today for neglect of duty. We marched 11 miles and camped at Waterloo Bridge over the Rappahannock River.”

On Tuesday, they added 26 more miles, much of it over turnpike roads with embedded stones “and when we stopped,” and camped near Sperryville, wrote Thomas David Wallace of the Winston Guards, “our feet was so worn and we were tired down. We was so tired down that we did not cook anything to eat.”

On Wednesday, the 12th, they marched only 6 miles and camped on the Culpeper Turnpike. But the next day they added another13 miles, in rain, and finally put up their tents at Culpeper Courthouse “where we will likely remain several days,” recorded Minutemen of Attala Private Mike Hubbert.

Indeed, after marching 97 miles since their drummers first beat the long roll near Leesburg on Friday, the 13th Regiment rested for five days. In the midst of it, wrote Hill, who was not related to the general, “Gen. D.H. Hill was appointed commander of this post.”