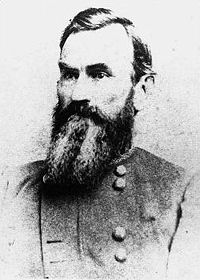 On August 18, 1863, it was announced at brigade drill that Colonel Benjamin Grubb Humphreys, commander of the 21st Regiment, had been promoted to brigadier general and taken command of the brigade.

Humphreys, 55, a Mississippi Delta planter and slave owner who had served five years in the state senate, had raised a company at the start of the war and been elected its captain. He was subsequently promoted to command the newly-organized 21st Mississippi Infantry Regiment, which had joined the 13th, 17th and 18th regiments at Leesburg in 1861.

Humphreys had been in Robert E. Lee’s class at West Point but was expelled in 1826 for participating in a student riot.

“He is a….very fine officer,” 17th Regiment Lieutenant Robert A. Moore wrote in his diary. “The boys are delighted with his promotion.”