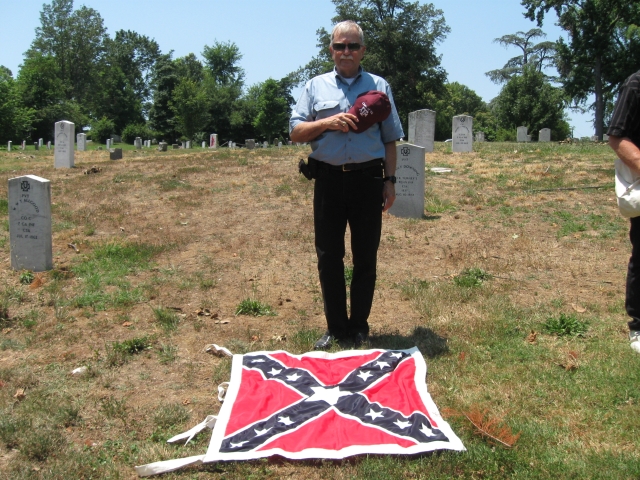 Texan Weldon Nash, Jr., whose ancestor Nimrod Newton Nash wrote so many of the good letters in this digital regimental until he was killed at Gettysburg, recently visited the Richmond grave of Henry T. Nash, another Minute Men private.

Henry, who was one of Newt’s cousins, was mortally wounded at Malvern Hill. He’s buried at Richmond’s famous Hollywood Cemetery —whose upkeep has obviously seen better days.

Weldon, a 1962 graduate of Texas A&M University and a Vietnam veteran, was the only other descendant of a Minute Men of Attala soldier (besides myself) that I knew about until  a descendant of Thurman Early Hendricks named Nancy (whose last name I can’t find, if I ever had it) emailed me from her home in California last spring.

Hendricks, whose diary has been quoted here, was captured at Fredericksburg and when he was paroled he went west and joined the Ninth Tennessee Cavalry, with which he survived the war.

Independent historian Jess McLean has him in the Newton Rifles, but Elaine, who is including her great grandfather in a new novel she’s writing about her ancestors, has proof that he was, indeed, in the Minute Men.

His muster roll records in the National Archives show that he was wounded at Leesburg. Ford family lore says he was carried off the battlefield by a loyal slave named Major who’d been sent with the regiment to the war to look out for him. They both survived.

UPDATE:  And this post fortuitously drew a comment from Mississippian Michael Steele, a fifth Minute Men descendant whose ancestor was Lorenzo D. Fletcher, the company’s first captain who recruited its original members. Click on comments below to read his remarks.