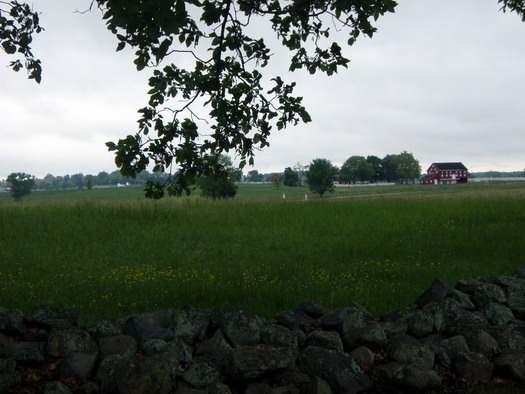 As it looked about this time last year from the approximate point at which Barksdale’s Mississippi Brigade began its charge around 6 p.m. on July 2, 1863, the subject of historian Phillip Thomas Tucker’s new book.

Tucker thinks Minutemen of Attala Private Newton Nash was killed just east of Plum Run, behind the trees in the far distance. No one knows for sure but I’ve always thought he died closer to the Sherfy Farm since his friends buried him the next day and they would not have had access to Plum Run on July 3. Photo by Jo Anzalone, a descendant of Winston Guard’s Private Jonathan James McDaniel who was also in the charge but survived.

9 Responses to The Sherfy Farm Today