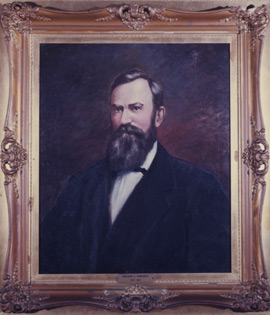 This is the official painting from the online site of the Mississippi State Archives, from Humphreys’ brief tenure as Mississippi’s twenty-sixth governor immediately after the war, which has a curious history.

He was a wealthy Delta planter and slave owner who formed a company in 1861 that became part of Barkdale’s Mississippi Brigade’s 21st Regiment, was later elected to be the regiment’s colonel and, after Barksdale was killed at Gettysburg, was promoted by Richmond to brigadier and took over the brigade. Which he maintained until he was disabled at Berryville in late 1864 and went home to his Delta plantation on wounded furlough.

Where he found the invading Yankees had burned everything and run off many of his slaves.

Humphreys was elected governor in October, 1865, six months after Lee had surrendered at Appomattox, by the surviving white men of the state. He served until his re-election in June, 1868, when occupying federal troops removed him on orders from Washington. They replaced him with Adelbert Ames, a Union general from Maine who commanded the occupation.

While Humphreys was governor, the Mississippi legislature passed the Black Codes, which limited the civil rights of the freed slaves and denied them the right to vote. The codes were the forerunner to the Jim Crow segregation laws. The Legislature also refused to ratify the 13th Amendment to the Constitution which abolished slavery. Both actions contributed to Humphreys being removed.

Curiously, the National Governors Association’s Humphreys bio today has him “seriously wounded” at Gettysburg, which he was not. Presumably they never heard of Berryville. The association’s bio also says Humphreys “resigned” from office. There is no hint that his departure was forced by the federal government.